Advantages of the MDS system:

The MDS system has been designed to dry the manure produced in poultry installations by using the ventilation system of the installations themselves, which, if necessary, is integrated with independent fans.
The MDS system can be installed alongside a shed predisposed for this aim or an already existing one, placed very close to the poultry installation.
It is composed by a superimposed succession of motorized belts. Fresh manure is loaded onto the upper part and unloaded, to be transported to the stocking area, from the bottom level. The desiccation level of the final product, dry manure, allows an easy transportation and can be considered as an NP organic fertilizer, whose content of N and P2O5 is included on a range between 4 and 6%. Side picture: MDS system separately installed in a independent building. 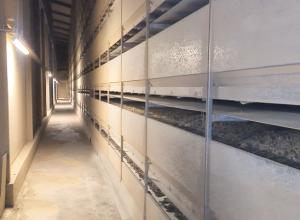 Operation of the system

The MDS works in the following way: the holed belts stay stopped until the manure, unloaded from the batteries, reaches, through the conveyors, the distributor. The weight of the accumulated manure on the distributor gives the signal to the MDS to start up through the sensor of minimum weight. In the moment in which the manure in the distributor begins to exceed, the maximum weight sensor stops the conveyors and the belts of the batteries up to that the excess is not distributed. Once the manure in excess is distributed on the holed belt the entire cycle starts again.

The fresh manure is offloaded onto a distributor which spreads it uniformly onto the perforated belt. The perforation of the belts allows the air to go through the manure . 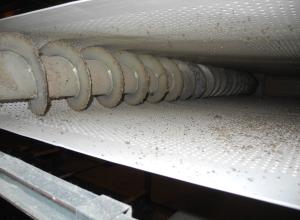 Pictures detail of perforated belt to allow air passing through the manure.

At the end of the process the dry manure is unloaded onto a cross belt. The duration of the drying process depends on the starting humidity of manure, on the humidity and volume of the air used and the frequency of the clearing operations.

Receive updates from the FACCO world.